The Downside of Being a Celebrity Prisoner: Protective Custody and its Relation to Solitary Confinement

On June 27, 2013, former Patriots tight-end Aaron Hernandez was denied bail in his upcoming trial for the murder of Odin Lloyd.  Until his verdict and sentencing, or alternatively a lower bail order from the judge, Hernandez will be confined in a Massachusetts state prison.  For the everyday citizen, this may seem purely procedural.  The accused is taken from the court room to the holding center, where he is then processed and booked.  Most prisoners are then entered into the general population where they await trial.  For Hernandez, a well-known football player with the New England Patriot, the situation is very different.

Upon entering Bristol County House of Correction (BCHC), Hernandez was immediately placed in a 7-foot by 10-foot cell with no air-conditioning or television.  Hernandez remains in this cell for 21 hours a day.  Three times a day, Hernandez gets an hour reprieve from his “parking spot” sized cell to make collect calls, shower, and exercise—essentially he is permitted to walk around in a small cage.  Only seven other inmates can see Hernandez, and he otherwise remains isolated from the other 13,000 inmates at BCHC.  Though the head of BCHC, Sheriff Tom Hodgson, has described Hernandez as “a model prisoner,” Hernandez remains in a solitary confinement-like situation usually reserved for “troublemakers.”  The circumstances of Hernandez’s celebrity-status have forced Hodgson to place Hernandez in protective custody for Hernandez’s own safety.  Hodgson fears that other inmates may try and attack Hernandez to “raise their own stature.”  Simply put, Hernandez’s strict confinement is a direct result of his fame.

Prison officials sometimes justify solitary confinement as necessary to separate vulnerable prisoners, such as juveniles and the elderly, or high-profile prisoners, like Hernandez, from the general population. But this "protection" comes at an unnecessarily high cost.  Isolation is particularly devastating for vulnerable populations . . . .  The harms of protective custody are so well known that the Prison Rape Elimination Act regulations that the Department of Justice requires mandate that adult facilities make their "best efforts" to avoid placing youthful detainees in isolation.  And, for the cognitively disabled or those with severe mental illness — who frequently make up the majority of those living in solitary confinement — extreme isolation can exacerbate their condition and can result in significant deterioration.

Studies on extreme isolation have found that prisoners can suffer irreversible effects, including depression and extreme hallucinations.  If these studies prove to be true, can three hours a day of limited interaction really be expected to counteract the harmful effects of extreme isolation?

As concerned as the ACLU may be for the well-being of Aaron Hernandez, prison officials have a duty to provide safety for their prisoners.[3]  Prisons have been held liable for the injury or death of prisoners when the prison failed to properly segregate prisoners for safety purposes (i.e. isolating sick and violent offenders from lower-level offenders).  For example, in Matsker v. Herr, a Seventh Circuit case, the court held that prison officials have an Eighth Amendment duty to protect prisoners upon learning about the likelihood of an attack.[4]  To complement this notion of protection, 127 M.G.L.A. § 32 states that the superintendents of prisons shall treat prisoners with “the kindness which their obedience, industry, and good conduct merit.”  For Aaron Hernandez, a “model prisoner,” this would suggest that he is not only entitled to the protection he needs, but also to a healthy living situation.[5]

Protective custody is a unique situation for prisons.  Aaron Hernandez is by all means a high-profile prisoner.  In a summer rife with newsworthy criminal cases (see George Zimmerman, James "Whitey" Bulger, Jodi Arias, and Dzhokar Tsarnaev), Hernandez’s name dominated news and sports outlets for well over a month.  How is a prison supposed to balance the scrutiny of solitary confinement with the danger posed to a recognizable face?  Sheriff Hodgson stands by his principles, even as two legislators in Massachusetts have proposed a bill to severely limit the current solitary confinement policies in their state.  As Aaron Hernandez ponders his future from within protective custody, criminal law scholars must consider the safety risks posed to those prisoners we are trying to protect.

Posted by Criminal Law Brief Blog at 6:00 AM

Friday, April 3, 2015: The Fourth Amendment in the Digital Age 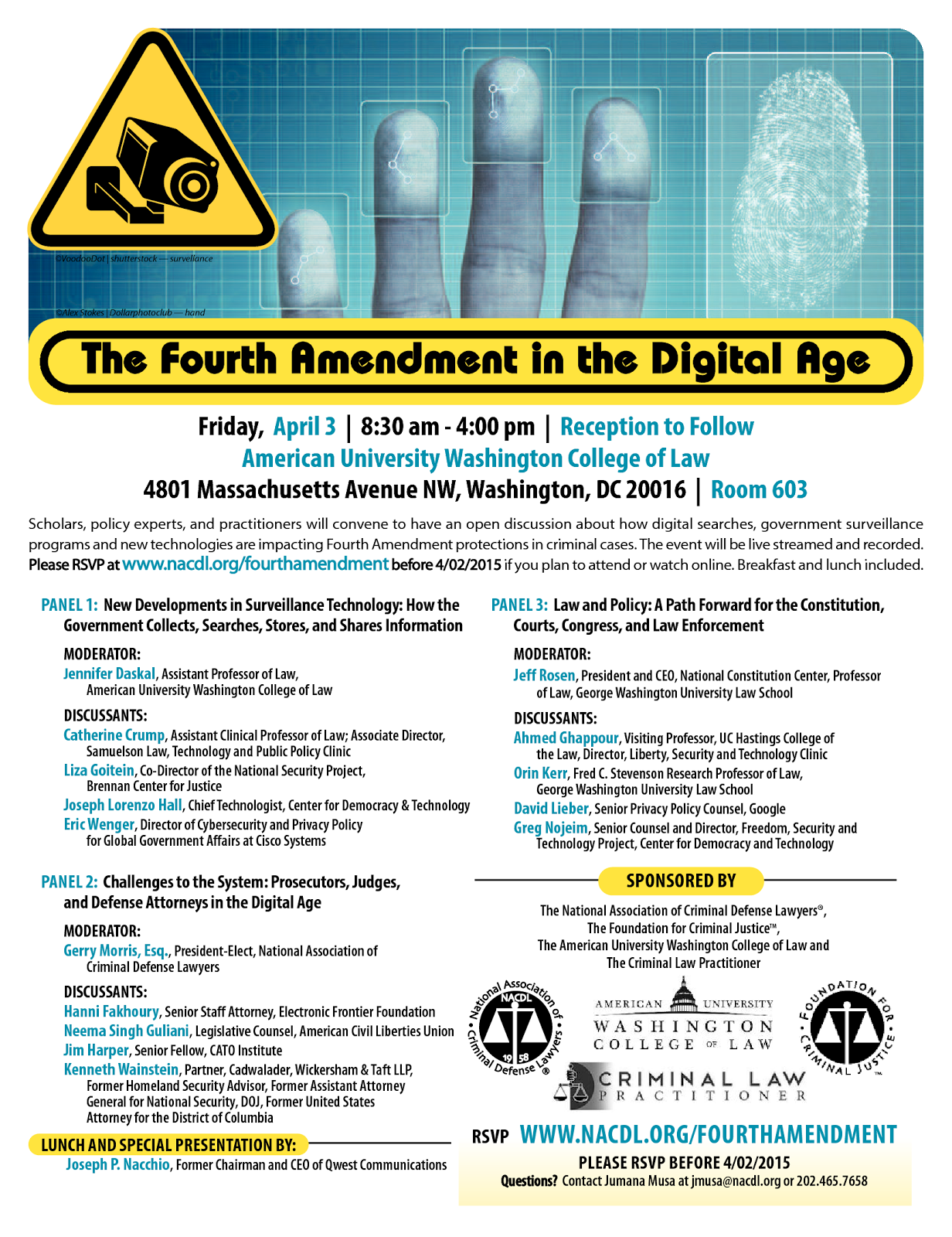 Event will take place in Washington, DC. Registration is free, but required.